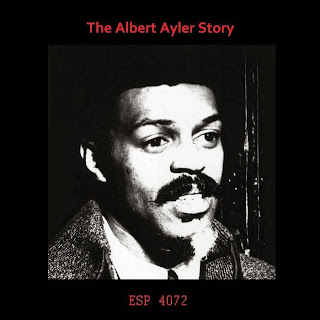 Something current, for a change. This accompanies a download-only July 2014 release with four disc's worth of tracks, mixing music and interviews.

Albert Ayler, one of the most controversial and polarizing musicians in the history of jazz, was accused of not being able to play his instrument, so radically did he reboot the whole idea of jazz saxophone. But consider this: in his youth in Cleveland, he was nicknamed "Little Bird" for his ability to mimic Charlie Parker, and later such old-school tenorists as Don Byas and Illinois Jacquet praised Ayler's playing.

The son of a saxophonist, Ayler was born in Cleveland on July 13, 1936, and from an early age was attracted to music. His father gave him his first lessons, starting him on alto sax. After excelling in both school and church bands, Albert began playing in professional bands in his mid-teens, famously being recruited for the band of blues harmonica great Little Walter Jacobs, who took him on tour. Ayler spent two years in Jacobs's band and also went on the road with New Orleans R&B singer Lloyd Price. At age 22, he joined the Army and was assigned to a Special Services band (an example of his playing in this context is included here), which basically meant he was still being a professional musician while he served for three years (and on top of that, he could take gigs in nearby Louisville). Eventually, he was posted to France, and also got to visit Denmark and Sweden.

During his time in service, he switched to tenor saxophone and began working on developing a more personal and revolutionary style. When he returned to the States, the change shocked old acquaintances. He was discharged in 1961, at which point Ornette Coleman had become notorious for playing microtonally and ignoring chord progressions, but Ayler went even farther into free improvisation. Faced with rejection in his native land (not only in Cleveland, but also during a brief sojourn in Los Angeles), Ayler returned to Sweden in April 1962.

He was out of place there too, playing with musicians who didn't fit his new style, but it's nonetheless historically fascinating to be able to chart his growth by listening to his June 1962 radio session in Finland, as guest with a band led by Swedish guitarist Herbert Katz – the first recorded example of Ayler's new approach. His rendition of "Summertime" brings to mind clarinetist Tony Scott's anecdote about a time, years later, when Albert sat in with his group and played the same tune: "…he went way out, you know. I turned to [fellow clarinetist] Perry Robinson and said, 'Does he know "Summertime"? He said, 'Forget that and listen to what he's playing!'" Ayler also sometimes got to play in the company of more adventurous and empathetic compatriots, notably with the Cecil Taylor Quartet the following month, as heard on an excerpt here that focuses on Albert's solo amid a free improvisation. By the time he left Europe and returned to the U.S. in 1963, he had recorded two albums, though again with relatively incompatible local sidemen.

When he returned to his home country, it was not to Cleveland, but to the center of the jazz world: New York City. Near the end of 1963, a friend of Ayler's urged Bernard Stollman, a lawyer who occasionally helped musicians, sometimes for no recompense, to go uptown to Harlem to hear Ayler sit in on an Elmo Hope gig. When Ayler got up to play, the other musicians stopped playing, but Ayler was used to such behavior by this time; it never stopped him from playing, and he played solo for twenty to thirty minutes. Stollman was overwhelmed by the intensity of Ayler's music. Earlier that year, Stollman had issued an album of music and poetry, Ni Kantu en Esperanto, to promote the constructed language Esperanto, of which Stollman was an enthusiast; he had named his label ESP for that reason.

Stollman's enthusiasm for Ayler's music led him to immediately propose issuing an Ayler LP. Ayler said he already had a session scheduled for the following February at Atlantic Studios (these recordings were eventually issued as Witches & Devils [AKA Spirits] and Swing Low Sweet Spiritual [AKA Goin' Home]), but that he would be in touch after that. To Stollman's surprise, Albert kept his promise. He had put together a trio with bassist Gary Peacock and drummer Sonny Murray that meant he was playing regularly with like-minded innovators, so their July 10, 1964 session went well, to say the least. In fact, it was a milestone of jazz. It would not be much of a stretch to say that ESP-Disk made Albert Ayler famous and Ayler made ESP famous. Ayler had impressed a few colleagues on the avant-garde jazz scene, but was little known before 1965, when ESP released his album Spiritual Unity, the label's first album of jazz, recorded at that 1964 session.

Spiritual Unity presented a new paradigm for improvisation. Not even Ornette Coleman's groups played with so little structure, standard pitch, and steady rhythm. Even Ornette had a system; Ayler ran on pure, unbridled emotion. Ayler's sound was so unprecedented, and so much rawer than any other jazz of the time, that poet Ted Joans famously likened it to "screaming the word FUCK in St. Patrick's Cathedral." Sometimes, it was expressed in squalls of untempered sound, sometimes in outbursts of poignant spontaneous melody. Meanwhile, under and around the leader's effusions, Peacock and Murray reinvented the roles of their instruments. Spiritual Unity ranks among the most influential 29 minutes on record in jazz, and "Ghosts," "The Wizard," and "Spirits" became familiar touchstones of "The New Thing," as this revolutionary musical movement was dubbed.

ESP followed up this success with many Ayler releases, some years later – more than by any other artist on the label. Three more 1964 recordings eventually appeared on ESP. Prophecy documented an earlier (June 14) trio performance at the Cellar Café in New York with, aside from the title track, the same repertoire as Spiritual Unity, but more loosely organized. It was recorded by Canadian poet Paul Haines.

The soundtrack for the art film New York Eye and Ear Control was recorded seven days after Spiritual Unity; it was a free improvisation for which Ayler's trio was joined by trumpeter Don Cherry, alto saxophonist John Tchicai, and trombonist Roswell Rudd. Even freer than Spiritual Unity, it's been called the link between Coleman's Free Jazz and Coltrane's Ascension. It is certainly not an iota inferior to Spiritual Unity, and the interaction with Cherry has led some to rank it even higher.

Another Ayler/Cherry collaboration that didn't appear until many years later, The Hilversum Session, was recorded at the end of a European tour with Cherry, Peacock, and Murray for a Netherlands radio station. It has not been blessed with the reputation of Spiritual Unity because of its tardy release, but it is just as boldly brilliant, the culmination of their year's work. We also sample a gig from earlier on that tour, this time without Cherry.

1965 yielded Ayler treasures as well as his style shifted. The transitional Bells was just 20 minutes (here we sample the beginning], released originally as one side of a clear vinyl LP with the other side. It was recorded at a May 1 Town Hall concert of ESP artists, displaying Ayler's new group. Murray remained, Albert's brother Donald joined on trumpet, and Lewis Worrell held down the bass slot. The denser sound of "Bells" shows Ayler moving towards the bigger sonic statement made on Spirits Rejoice, a September 23 Judson Hall session (ESP used the empty concert hall as a "studio," its reverberation adding to the bigness of the sound). Albert and Donald were joined in the frontline by Charles Tyler on alto sax while Peacock paired with fellow bassist Henry Grimes, with Murray a constant. Both Ayler's playing and the band sound are even more intense than before, the parts of the players sometimes only loosely related. Some defended it as an energetic ensemble style harkening back to the early days of New Orleans jazz in its intertwining of independent lines; it came to be called "energy music" and started a movement that continues to the present day in the playing of Charles Gayle, Sabir Mateen, and Peter Brötzmann.

In 1966 Ayler was signed by the Impulse! label, but a pair of LPs recorded at Slug's Saloon that May 1 was released by ESP many years later. It showcases Albert's regular group of that time: Donald, violinist Michel Samson, Worrell, and drummer Ron Jackson, AKA Ronald Shannon Jackson, continuing Ayler's run of superb, innovative drummers. The less-than-hi-fi sonics pale to insignificance in the face of the sheer power of the performances. A few non-Impulse! concert performances from '66-67 further extend our view of Ayler's evolution.

When Ayler's band went through Customs in July 1970 on their way to play at a festival in France, keyboardist Call Cobbs got held back and arrived a day late. Minus Cobbs, the band played anyway. The music-making of the resulting ensemble is freer and more adventurous than on the quintet's following Maeght Foundation concerts. This unique document, Ayler's penultimate recording, thus brings him back to something close to the trio setting in which he first found fame. Bassist Steve Tintweiss (who decades later brought his cassette tape of the concert to ESP) and drummer Allen Blairman are sometimes joined on Live on the Riviera by Ayler's partner Mary Maria, who adds occasional vocals and, once, another sax. Exactly four months later, Ayler's body would be found in the East River.


To dwell on how small Ayler's recorded repertoire was, and how often his bands recorded the same tunes, would be to miss the vastly larger point that the playing of both Ayler and his band mates was of such great spontaneity and imagination that no two performances are remotely the same beyond their themes. Ayler's influence at the time and for decades to come was based on his ESP records much more than his work for any other labels (yes, we're biased, but we're hardly the only ones who think that), but given the briefness of his career, every recording of Albert Ayler is precious musically and spiritually.
Steve Holtje at 10:59 AM
Share