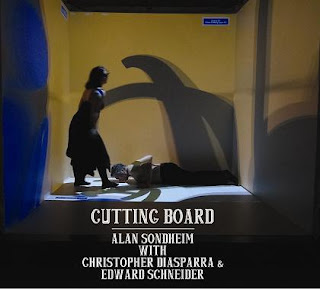 Short because it was written to fit on one panel of a "digipak." Not included: how funny Alan is; how neurotic he is; how incredibly prolific he is, far beyond his discography of released albums. Almost every day he posts a track of freshly improvised music on ESP-Disk's Facebook page.

Alan Sondheim is the first artist from ESP-Disk's 1964-75 heyday to return, since it was revived in 2005, to issue an album of new material on the fabled label. We find it especially appropriate that he does so during ESP's second annual 50th anniversary celebration. It was in 1963 that owner Bernard Stollman recorded ESP's first album, Ni Kantu En Esperanto, which gave ESP its name; 1964 was when he first began recording the avant-garde jazz artists who would make the label famous, and these were first issued in 1965.

Sondheim joined the roster with a 1967 session, Ritual-All-7-70, then followed up with 1968's T'Other Little Tune. (Drumming on the latter was Joel Zabor; now known as Rafi Zabor, he reunited with Sondheim at ESP's 50th anniversary concert in November 2013.)

Sondheim got his musical start as a guitarist, but soon moved into a much more original sound utilizing a vast array of instruments from around the world. His instrument collection has only grown in variety all these decades later. Cutting Board, his eighth album, is his first instrumental group album; his other albums have always either been solo (and there are two solo tracks on Cutting Board as well) or, like this year's Avatar Woman with partner Azure Carter on the Public Eyesore label, featured female vocalists. His collaborators here intertwine saxophone lines that offer a relatively consistent set of timbres against which Sondheim's arsenal of sounds presents contrasting textures in music of great energy and variety.

Though he's a pure improviser, Sondheim rightly insists that he doesn't play jazz; even playing with two saxophonists, he's outside that tradition's spectrum. The eclecticism of the sounds he's working with sonically can tenuously seem to connect him to world music, but he doesn't play the instruments in traditional ways. And on rare occasions you can hear the blues lurking, but I wouldn't bet on Living Blues putting him on the cover. Maybe if somebody starts a music magazine (or website) called Beyond Category, then Sondheim can be a cover subject.
Posted by Steve Holtje at 11:02 AM No comments: 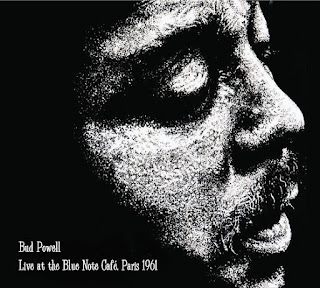 When I put together this reissue, my focus was on fixing the track indexing (on the original CD release, if you just played the whole thing through, you'd never notice any problem, but if you skipped to a track, you'd be starting a few seconds into it) and using the original cover art, a pencil drawing by Francis Paudras. I probably should have had somebody with more Powell expertise write the booklet notes, but had to economize and thus wrote them myself. I could not have managed without constant reference to Peter Pullman's detailed biography Wail: The Life of Bud Powell, which I highly recommend. I bought it directly from Mr. Pullman via his website, and so should you!

Bud Powell moved to Paris, France at the end of March 1959. A 1954 arrest in Philadelphia for possession of heroin had cost him his cabaret card after his 1955 guilty plea in the case, so, for several years, he had been legally barred from steady gigs in New York City and had had to, instead, rely on out-of-town bookings, which did not always go well, given his mental problems and addictions. In contrast, a two-week engagement in November 1957, at Club Saint-Germain in Paris, had gone well.

Once in Paris, Powell soon hooked up with drummer Kenny Clarke, with whom he had made history in the previous decade on the jam sessions and recordings in which bebop was created. Clarke had had a band with Lester Young at the Blue Note Café, from January '57 into March (following which, Young, quite ill, returned to New York and immediately died). So Powell's arrival was fortuitous; he and Clarke played at the Blue Note for all of April. In December, they reconvened at the club, with bassist Pierre Michelot and—avoiding the question of who was the bandleader, though it was Bud who called the tunes—billed themselves as The Three Bosses. With time out for tours and festival appearances, they worked there for much of 1960 and '61 The first three tracks here, with Zoot Sims, date from January 1961.

Powell's alcoholism, prankishness, or a combination of both got the best of him in January 1962, when the Blue Note fired him for stealing a customer's drink. (Kenny Drew replaced him.) Powell then worked in Switzerland, Sweden, Copenhagen, and Norway for much of the rest of the year. Eventually, another visiting American saxophonist, Johnny Griffin, asked for Powell to accompany him at the Blue Note, and Powell got back in the club's good graces by 1963.

The longer trio set, recorded by Alan Douglas, is from 1961, although one discography, without explaining why, puts it in 1962, without pinning the date down any further. Though this is unlikely, were it true, it would have to have taken place in the first week of January '62, just before Powell was fired. It's hard to believe that anyone, while listening to Powell navigate the fleet tempos of these bebop standards, would care all that much about what might be as little as a matter of a week's difference.

Powell's work, from 1954 on, is generally denigrated, and certainly this always erratic artist, after a police beating, various shock therapies crudely administered during involuntary stays at mental institutions, the ravages of heroin and alcohol abuse, and the side effects of chlorpromazine AKA thorazine, was only rarely able to approach the top-notch digital technique he had flaunted in his youth. But sometimes, as in these concerts, he had good nights, and the greater expressiveness of his later years has its own attractions. His time in France rejuvenated him and spared him the hassles and, to some degree, the temptations of New York that had dragged him down. Nearing the sunset of his career, his musical light could still burst through the clouds and dazzle his faithful listeners.
Posted by Steve Holtje at 8:01 AM No comments: