My booklet notes for a new album of piano music 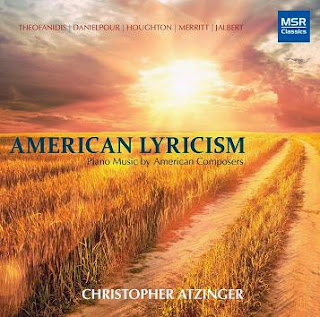 Last year, I was commissioned by pianist Christopher Atzinger to write the booklet notes for his then-yet-to-be-titled album, now available and named American Lyricism. Below are my notes. (I adjusted the first paragraph to reflect changes made since I submitted these notes, but did not go through the rest of the paragraphs to see if there were further alterations.)

Although this recital has no thematic conceit binding its works together, they have much in common: All five composers are American, all are living, and all work within tonality. Within those parameters, there is plenty of variety from the generations of composers whose music is heard here.

Christopher Theofanidis (1967- ) has not only received Charles Ives, Tanglewood, Fulbright, and Guggenheim fellowships and the Barlow and Rome Prizes along with six ASCAP Morton Gould Prizes, he even earned a Grammy nomination. He is currently Professor of Composition at Yale. Mr. Theofanidis is another composer who started out as a pianist, and his four-movement work All Dreams Begin with the Horizon – "written as a birthday present to be performed at a salon-like party," he notes – is inspired by the character miniatures of Robert Schumann's ultra-Romantic cycles. Hence, it is no surprise that it is dramatic, colorful, melodic, and displays a wide range of moods. The finale, "menacing," is a finger-buster of the first degree.

Richard Danielpour (1956- ) studied with Vincent Persichetti and Peter Mennin; after early serial experimentation, he arrived at a style continuing their school of colorful tonality. Recipient of MacDowell, Guggenheim, and Rockefeller fellowships, Mr. Danielpour is currently on the faculties of the Curtis Institute and the Manhattan School of Music. His first Preludes were inspired by dreams, whereas in The Enchanted Garden (Preludes, Book II) he drew on memories of actual events. Where Impressionist moods and sounds dominate the first book, there is a more tangible air to the later and longer set, though the harmonies are occasionally still Impressionistic and both books feature explosive, vernacular-tinged changes of pace – "Mardi Gras" earlier, the scherzo-esque "Surrounded by Idiots" and jazzy "Lean Kat Stride" here. "Persepolis" recalls a childhood trip to Iran and references his half-Persian heritage. The beautiful "Elegy," written for a friend who lost a companion, suggests happy times fondly if sadly recalled. "A Community of Silence" alternates perfumed passages with violent outbursts; similarly eluding titular expectations, "There's a Ghost in My Room!" is not the eerie sort of spooky, but constantly startling, though with menace lurking. The lengthy "Winter Solstice" closes the set with lyrical yearning shadowed by a slightly foreboding tread.

Monica Houghton (1954- ), a Harvard graduate and later a student of Margaret Brouwer, began composing in 1993 and received her M.M. in Composition a decade later. After teaching and receiving awards in Ohio, notably including an Individual Excellence Award from the Ohio Arts Council in 2007, she returned to Reno, Nevada, where she grew up. Her sparkling Sonata (1998) won the 2000 Lyman Prize, and deserves to become a standard of the modern repertoire. Full of emotive gestures and mercurial mood changes, it is positively Beethovenesque in its brooding, searching, striving, and ultimately triumphant character.

Justin Merritt (1975- ) was the youngest-ever winner of the ASCAP Foundation/Rudolph Nissim Award and has received an ample host of additional awards. Taught by Samuel Adler among others, he is also the youngest composer on this program. He writes that Chaconne: Mercy Endures, commissioned by and written for Mr. Atzinger, "is based on the chorale tune Danket dem Herren, den er ist freundlich [Give thanks to the Lord, for He is good]. The constantly repeated refrain in that text is 'Mercy Endures.' The tune functions as both a recurring melodic fragment and as the basis for the chaconne formula." This is the moodiest and most dissonant piece on the program, its theme splitting into granular motifs that chase their own tails, dissonantly rubbing against each other to generate a clangorous rumination on travail and endurance.

Pierre Jalbert (1967- ), who studied with George Crumb, is a prolific composer of mostly instrumental works. Now Professor of Composition and Theory at Rice University's Shepherd School of Music in Houston, Mr. Jalbert is also an excellent pianist, and his Toccata is a showpiece. It is also, even beyond its flashy technical appeal, a crowd-pleaser. Bluesy harmonies, Minimalist rhythmic drive, and a combination of complex weight with absolute clarity come together in a streamlined juggernaut of a work that whirls and glints with thrilling intensity. It certainly provides the program with a pulse-quickening conclusion, effectively the encore of Mr. Atzinger's CD recital.
Posted by Steve Holtje at 9:18 AM