More About Songs of Death and Fumiko Nakajo 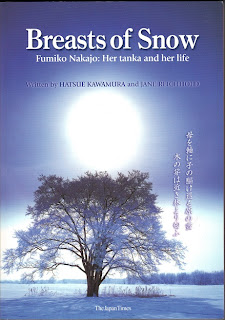 Jane Reichhold, whose book Breasts of Snow - Fumiko Nakajo: Her tanka and her life taught me everything I know about Nakajo and provided the poems that I set in my new mini-cycle Songs of Death, has very generously given me permission to use the transliteration that she and coauthor Hatsue Kawamura (who, alas, has been in a coma for seven years) produced for the book, and also to quote them here in their entireties.

And, in very good news for anyone interested in reading these soul-shaking poems, Ms. Reichhold confirms what I saw in a 2004 review I found online: the book can be bought from her directly. She can be emailed at jane(at)ahapoetry(dot)com.

Here are the poems I set to music for Songs of Death, along with their translations:

with the light off
stealthily something
moves to me
I have tamed it now
as if it were a pleasure
Posted by Steve Holtje at 1:08 PM No comments:

The music I'm about to write about is in the post below this one. Sorry it's kind of fuzzy. 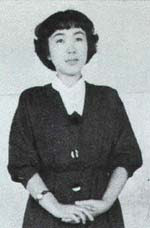 A brief mention of Japanese poet Fumiko Nakajo (I wish I could remember where) and her tragic life story sent me to Amazon.com, where I found a copy of Breasts of Snow - Fumiko Nakajo: Her tanka and her life, by Hatsue Kawamura and Jane Reichhold (The Japan Times), which I highly recommend if you can track it down (there were two listed: one for $20, and one for $350; I of course bought the $20 one). Nakajo (1922-54) wrote about being divorced before that was common in Japan, and then, when she had breast cancer, wrote about that as well, all the way through two mastectomies and practically to the moment of her death. Her first collection of poetry was published days before she died.

Initially I had picked out 30 of her poems that I might want to set to music. Then I went through and made a different selection of 21 specifically having to do with her battle with breast cancer, later narrowed to 15 and then 7. The first three I set were specifically about facing death, and didn't reference breast cancer, and ultimately I decided that they were enough, partly because that focus is more universal, partly because more would be too much of such an intense subject, partly because I just spent the afternoon revising those three to what I think is their final form, and frankly it was so draining that it left me nearly paralyzed for over an hour and I don't want to do any more of that. Yes, these poems are that powerful.

My previous song cycle drawing on the work of female Japanese poets is in English (see The Obscure Composer, Part 1), but for this one I somehow felt like daring to set the original Japanese. I did that once before with a long poem by Hitomaro and it was very difficult, but because these are shorter and modern, it wasn't quite as challenging from the technical point of view, and of course my Japanese wife was very helpful. It's weird how transliterations of Japanese don't always reflect the actual pronunciation; occasionally some syllables get elided. For instance, what's written as "narashitsu" Chie pronounces as "narash'tsu."

Back on October 22 I had written a one-page solo piano piece that was inspired by my love for a piano work by a much more famous composer. I'd mostly written it just for the fun of doing so and had no plans to deliver it to the world. Ha! I should know myself better than that; having it there practically waiting to be cannibalized made it irresistible to me when, on November 6, I finally got to work on setting Nakajo's poems. The piano piece's mood fit the mood I wanted for setting these poems: bittersweet without being too bitter. I also thought that since the three poems were linked thematically, it would be appropriate to have them linked musically as well by putting them into this existing framework as a triptych.

As far as length alone the fit was practically perfect, and after a couple evenings of work, they fit together well enough in terms of words onto melodies (only a little rejiggering required). As a set, however, they didn't work like that. They were too homogenous, and the poem in the middle was sufficiently different in mood that I felt the music didn't work with those words. I tried speeding up that section, but harmonically and melodically the homogeneity remained troubling. After fiddling with the harmony for a while without success, I came up with a drastic solution: I ditched all the harmony in that section, replacing it with the repeating minor second you can see in Song #2 in the post under this one. That fit the mood much better, while the retention of the melody kept the connecting link to the other two songs.

Can anyone tell from what remains after all that revision just what the original musical inspiration was? In other words, what was the piece by another composer that inspired the original piano piece I wrote? A small piece of its melody remains, quite significantly albeit with altered rhythmic emphasis.
Posted by Steve Holtje at 6:56 PM 1 comment: 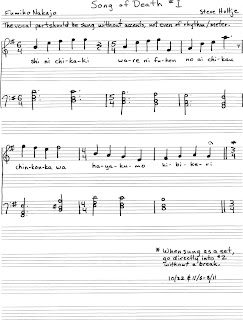 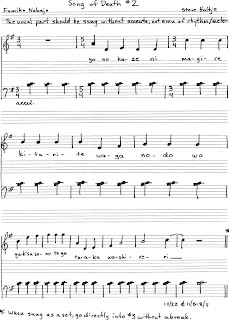 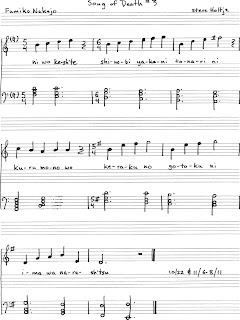 Posted by Steve Holtje at 6:14 PM No comments: